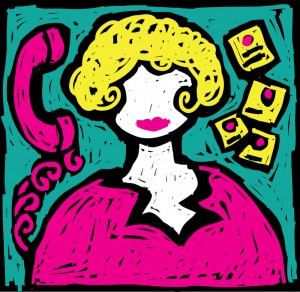 Offices aren’t what they used to be. When I was a kid, my dad–and everybody else’s dad that I knew–had a secretary. She was always very nice and had candy on her desk, plus she answered his phone, ran his errands, kept his calendar and knew where he was all the time, even when my mom had no idea.

When I got older and got cubicled for the first time, I discovered that these secretaries weren’t just the ones who knew where the bosses were all the time, they were the ones who knew how to make the coffee, operate the copy machine, send a fax or find an extra large paper clip. They also knew when the boss was in a good mood and was likely to say “yes” to a day off, and even more importantly, when the boss was in a bad mood and was likely to bite your head off if you asked him to hold the elevator. Secretaries had super powers like eyes in the backs of their heads, and ears that could hear through walls. They could make appointments appear or disappear with a flick of their pen, and make or break your career with the raise of an eyebrow.

My boss called his secretary his “work spouse,” which was a pretty apt description. He would have been literally lost without her–she printed up a color-coded itinerary (“don’t forget to go potty and eat lunch”) and driving directions for him every day. Now, a whole generation of these Wonder Women seems to be lost. I’m guessing they’ve discovered they have the power of invisibility.

According to the International Association of Administrative Professionals (IAAP), there are more than 4.1 million administrative assistants and secretaries in the United States, but I defy you to find one anywhere but on school campuses.

Call an office today and you’re lucky to get a real live person to answer the phone, let alone a real live person that resides in the same country, let alone the same building, as the person you’re trying to reach. And as to knowing the boss’s whereabouts: good luck. You can try her cell phone, pager, emailing or texting her, but if she doesn’t answer, there’s nothing you can do but sit there in limbo and wonder if she’s mad at you or just taking a day off.

We used to have Secretaries Day, where everyone in the office chipped in for flowers and took our Gal Friday out for their annual lunch. That’s all over with now. Secretaries, where they still exist, have been transformed from the Target to the Tiffany’s of office professionals.

In fact, it’s hard to find anyone who’s not in the White House Cabinet that calls themselves secretaries. The politically correct term is “Administrative Professionals,” with this entire week designated to wine and dine them and generally try to bribe them into making sure your career stays on track.

According the IAAP, there’s been a ginormous evolution in clerical duties in the past 20 years. Where secretaries once took phone messages (remember those little pink slips of paper?), now they “coordinate communications.”

Technology has taken over so many of the tasks that secretaries used to do; we’re now up to Office Assistant version 3.3. Secretaries used to take dictation and shorthand, then type memos and letters. Now they’ve mastered integrated computer software applications and use the work “task” as a verb.

How do you show your appreciation for these unsung someones who run the show? As far as gifts go, forget the candy and the flowers. IAAP’s advice is a presentation from a motivational speaker or a membership in a professional organization, or–get this–a computer hardware/software upgrade. You call that a gift? I say nothing says “thank you” better than cold, hard cash–and pick up your own dry cleaning this week.

What’s your take on secretaries? Send me a memo, or better yet, have your people email my people at Leslie@LeslieDinaberg.com.

Originally appeared in the Santa Barbara Daily Sound on April 27, 2007