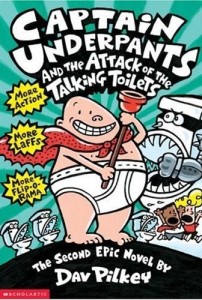 Once upon a time I imagined raising my child in an exquisitely gender-neutral environment. None of this pink for girls, blue for boys stuff. I was sure I would raise a boy exactly the same way I would have raised a girl.

Then I actually had a child.

As the epidural wore off, reality kicked in. I had joined the MOB. I was the Mother Of a Boy. Nature, nurture, schmurture. I quickly discovered how little it mattered what I did.

Koss took about five minutes to decide he liked his stuffed football better than his teddy bear and another three to decide that peeing in my face was hysterically funny.

The fart jokes started about ten minutes after that, and seven years later, I’m still holding my breath.

He had his own little alien personality from the very beginning.

I had pictured us cuddled under a bright yellow comforter, sharing my favorite books from childhood. Nancy Drew, Little House on the Prairie, Are You There God, It’s Me Margaret?…yeah, right. Our bedtime reading was filled with Dinosaur stats and Pokemon facts. His boy-brain was so hungry for straight information, I felt lucky if our story time involved any story narratives at all.

Oh, and there is nothing funnier than laughing until milk spurts out of your nose–and if it’s chocolate milk, it’s even funnier. And if you can somehow turn spurting chocolate milk out of your nose into a competitive sport with Olympic or Guinness Book potential, then half the world’s population would forever be in your debt.

This is not just a MOB observation, it’s scientific fact.

It is actually embedded in our DNA that when we go on vacation, I’m the only one who remembers to pack our suitcases with extra sweatshirts, toilet paper, snacks, books, light bulbs, sunscreen, magazines and the directions to our hotel, while my husband, Zak, is the only one who can figure out how to fit all that stuff in the trunk of our car.

And if for some reason Zak can’t get everything to fit, Koss is right there telling him how to do it.

We call it “Male Answer Syndrome” in our house.

My mom used to call it “Diarrhea of the Mouth,” which Koss finds hysterically funny.

Now that I’ve had seven years experience in the MOB, I guess I shouldn’t really be surprised to find that Koss would rather read the Encyclopedia of Spiders than Charlotte’s Web. If somebody wrote Captain Underpants and Attack of the Farting, Spitting and Barfing Spiders, Koss would really be in heaven.

So I guess I shouldn’t be surprised that the potty humor genre has become so popular. Books with titles like The Day My Butt Went Psycho, Captain Underpants and the Wrath of the Wicked Wedgie Woman, and Zombie Butts From Uranus! are somehow more attractive to boys than The Trumpet of the Swan, The Wind and the Willows, and From the Mixed up Files of Mrs. Basil E. Frankweiler.

“Captain Underpants is totally funny,” MANswers my 41-year-old husband. “Want to smell something gross?” asks Zak, targeting a gigantic fart in our direction and immediately sending our son into peals of laughter.