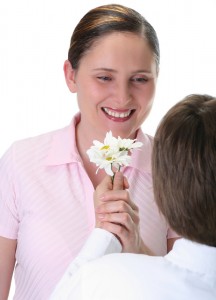 For those of you who have no exposure to TV or calendars or school art projects, it may come as big news that Mother’s Day is coming up.

Now, I wouldn’t say no to being showered with diamonds, although I’d settle for a real shower alone for 10 minutes without someone interrupting me on an “urgent” matter. Candy and flowers would be good, just not sour worms and dandelions. However, what I really want this Mother’s Day is my very own remote control.

No, this isn’t one of those columns about men and their need to control the television remote — although my six-year-old son has mastered the picture-in-picture swap features and figured out how to TIVO every episode of the Power Rangers for the next 327 years. How is it that he still can’t figure out how to get his clothes off his body and into the hamper?

Anyway, what I want for Mother’s Day is that remote control that Adam Sandler has in his new movie, Click.

What a perfect gift.

The next time Koss chatters incessantly about Pokemon — seriously, the kid can go at least 10 minutes without taking a breath — I could simply push the mute button, and smile and nod and think about George Clooney. Or better yet, I could rewind to when Koss was a year old, just learning to talk, and I reveled in his every word.

Still better, I could rewind my life to the time I “just missed” meeting George Clooney at a party because I spent that extra 17 minutes changing outfits because I couldn’t decide what to wear when I met George Clooney. Of course every outfit I’ve ever owned would look ravishing, if I could just rewind my life to that one summer when my height was actually in perfect proportion for my weight.

I could rewind to 1986, and meet my husband during that legendary summer when he was “peaking,” and supposedly had better abs than George Clooney. That I’d like to see.

That I’d like to be able to even picture.

But enough of the past, my Mother’s Day remote would have a wicked fast forward that I could use to have written a novel, lost 20 pounds, learned Spanish, run a marathon, and avoided a lifetime of awkward conversations — all without the actual effort of writing, dieting, studying, training or talking. That’s my kind of remote.

The pause button could be pretty cool too. Adam Sandler uses his to slap his boss around a little and hit a little kid in the head with a baseball, but I like to believe that I’d be a non-violent remote controller. When that lady with 14 items in the “10 items or less” line at Vons starts to count her $19.99 in change out r-e-a-l-l-y s-l-o-w-l-y, I would simply pause her shopping and place her butt in the appropriate non-express line. It would all be very civil, no violence required.

Same goes for the mega minivan parked in two spaces at Five Points. I would simply pause all of the other shoppers while I double-parked behind Ms. Minivan and got a few errands done.

Hey, maybe I could use the picture-in-picture function combined with the pause, and simply be in two places at one time. You know, like the lady who sits under the hairdryer at a salon but is also cleaning her oven. I could be sitting at T-Ball cheering on my team while getting a massage, or cooking a gourmet dinner while playing an exciting game of Klondike on my computer, or eating an ice cream bar while running a 10K.

What a great gift that remote will be.

Here’s hoping the batteries don’t run out while I’m speed rewinding past childbirth.

What would you do with a universal remote? Email email

Originally published in Santa Barbara Daily Sound on May 5, 2006.