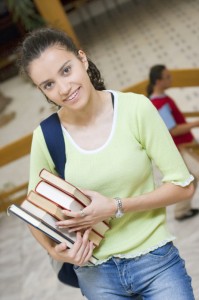 It used to be that once you got accepted to college you had that last semester or two to relax, slack off a bit, and finally enjoy yourself without all that pressure to get into the school of your choice.

Ah, the good old days. I remember Senioritis running so rampant at my high school that even the teachers stopped showing up those last few weeks. My Biology lab was empty, except for a note on the chalkboard that read: “Gone to Maui. Will the last person in class please turn out the lights?”

I still use some of those stolen beakers for mixing my more exotic cocktails.

Ah, those were the days.

Apparently the good OLD days. There is no more slack for slackers, the Los Angeles Times reported this week. As if conquering Admission Impossible weren’t enough, now students have to remain focused–or face the consequences.

The article said that starting this month, some universities are revoking admission offers to students whose grades were good enough to gain acceptance when they applied, but whose final exams and transcripts took a fourth quarter dive.

For example, my alma mater, UCLA, has begun to send out letters informing some students that their academic record no longer meets the standards for admission.

Of course, Senioritis has infected the college-bound since, oh, the beginning of time. But with a high-stress admissions process that now begins in kindergarten–at age 7, Koss is already behind, having yet to master a third language or a fifth instrument–today’s seniors may be more tempted than earlier ones to let up once they get in.

And of course colleges have always threatened kids with rescinding their admissions, telling them college acceptance is conditional, they have to keep up with their studies, blah, blah, blah. But until now, it was just an idle threat.

Slackers beware: after hundreds of years of “conditional acceptance,” schools are finally making good on their threats. They really are. In addition to reading the Los Angeles Times article, in order to verify the authenticity I did extensive research on this (asked my dad), reviewed my files (back issues of Oprah Magazine), and consulted my advisors (a small boy named Koss and a turquoise fish named Beta).

It’s a new era. There’ll be no more slacking during your senior year of high school. You may think you’re done. You may have gotten a thick envelope with a relentlessly perky congratulatory letter from the admissions office. Your parents may have even sent in a nonrefundable deposit.

Worse yet, you may have excitedly told strangers on the street where you’re going to college. (How embarrassing!) You may even already be wearing your collegiate colors with pride, having bought out the student store logo wear department.

You’re in. They said you were in. You have the letter encased in an acid free scrapbook to prove it. But remember, you’re not quite done.

It’s the end of an era–no more slack for seniors. High school won’t be the same anymore.

Of course, college isn’t exactly the same either. At an average of more than $20,000 per year for tuition, room and board, it’s enough to make me want to stay poor. I just hope that by the time Koss graduates high school there are scholarships for students who excel in computer games and doing math while twitching. Otherwise I’ll have to win the lottery, sell a kidney–or encourage my son to slack off during his senior year.

Email email if you know anyone who’s had their college admission invitation rescinded. For more of Leslie’s columns visit www.LeslieDinaberg.com.

Originally appeared in the Santa Barbara Daily Sound on June 29, 2007