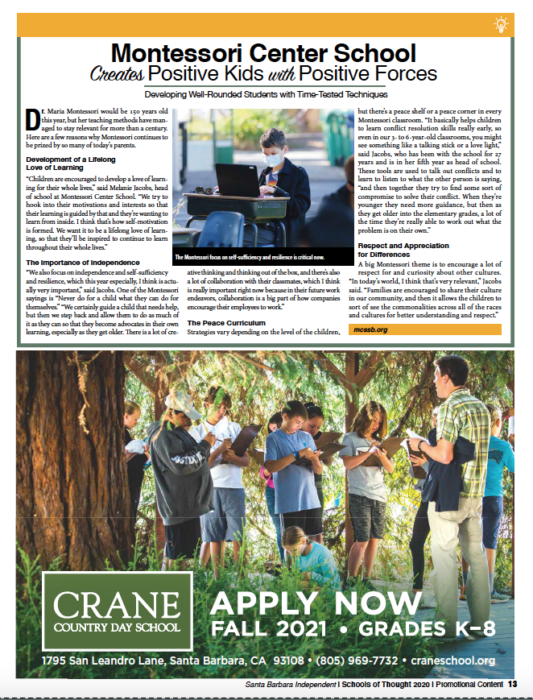 Dr. Maria Montessori would be 150 years old this year, but her teaching methods have managed to stay relevant for more than a century. Here are a few reasons why Montessori continues to be prized by so many of today’s parents.

Development of a Lifelong Love of Learning
“Children are encouraged to develop a love of learning for their whole lives,” said Melanie Jacobs, head of school at Montessori Center School. “We try to hook into their motivations and interests so that their learning is guided by that and they’re wanting to
learn from inside. I think that’s how self-motivation is formed. We want it to be a lifelong love of learning, so that they’ll be inspired to continue to learn throughout their whole lives.”

The Importance of Independence
“We also focus on independence and self-sufficiency and resilience, which this year especially, I think is actually very important,” said Jacobs. One of the Montessori
sayings is “Never do for a child what they can do for themselves.” “We certainly guide a child that needs help, but then we step back and allow them to do as much of it as they can so that they become advocates in their own learning, especially as they get older. There is a lot of creative thinking and thinking out of the box, and there’s also a lot of collaboration with their classmates, which I think is really important right now because in their future work endeavors, collaboration is a big part of how companies encourage their employees to work.”

The Peace Curriculum
Strategies vary depending on the level of the children, but there’s a peace shelf or a peace corner in every Montessori classroom. “It basically helps children to learn conflict resolution skills really early, so even in our 3- to 6-year-old classrooms, you might see something like a talking stick or a love light,” said Jacobs, who has been with the school for 27 years and is in her fifth year as head of school. These tools are used to talk out conflicts and to
learn to listen to what the other person is saying, “and then together they try to find some sort of compromise to solve their conflict. When they’re younger they need more guidance, but then as they get older into the elementary grades, a lot of the time they’re really able to work out what the problem is on their own.”

Respect and Appreciation for Differences
A big Montessori theme is to encourage a lot of respect for and curiosity about other cultures. “In today’s world, I think that’s very relevant,” Jacobs said. “Families are encouraged to share their culture in our community, and then it allows the children to
sort of see the commonalities across all of the races and cultures for better understanding and respect.”

Originally published in the Santa Barbara Independent on November 19, 2020. To read the section as it appeared in print, please click here.