An Update on the College’s Signature Project

The SBCC Promise — which provides regional high school graduates the opportunity to attend Santa Barbara City College full-time, free of charge, for up to two years — started its fifth year this fall, with 5,000 students projected to have benefited by the end of the year.

Have there been any changes to how the SBCC Promise works? We’ve been adjusting the offerings of the Promise based on feedback, so for us it’s a real-time experiment. One of the things we’re trying to figure out is how many students complete two or three years of the Promise but still have to stay one or two or three more semesters to be ready to transfer.

We’ve also gotten requests from a few students saying, “I’m ready to go, but I can’t afford to pay for all of these transfer applications.” So we just added that if they go to a counselor and say, “I need help with this,” we’ll pay for their transfer apps. We’ll do that for students who were Promise students in, say, 2016-17 and are just now completing what they need for transfer.

You also changed the program so students who have a unit load accommodation, and take fewer classes because of a disability, can stay in SBCC Promise for longer. Yes, as we learn about different things, we’ve been doing that kind of stuff as we’ve also tried to measure and monitor.

Does SBCC Promise pay the college the same amount it would get if the students were paying individually? Yes, and in fact this was one of the unanticipated benefits that [former SBCC president] Jack Friedlander told me about the first semester we did this, before he retired. He said, “Do you realize you actually generated a half million dollars last semester for the college? All of those students, who based on previous data would not have been full-time, they went full-time so they could take advantage of the Promise. Because of those additional units they paid for, that equaled half a million dollars of revenue for the college.”

How are you doing right now in terms of funding? It’s tough. We have now sustained it for 4.5 years. [Initially,] we raised about $3.5 million within six months. So we raised enough money to get all the way through year one and two and part of year three very early and then it sloughed off. Basically, we were excited, we put all our energy into the program, and now we have to circle back and kick up our fundraising. So you can expect after the pandemic moment starts to shift back to whatever our new normal is, you’ll see a big public campaign around funding the Promise. 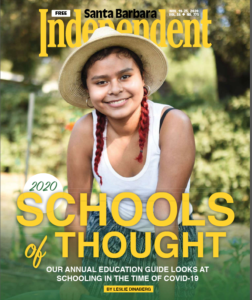 Originally published in the Santa Barbara Independent on November 19, 2020. To read the section as it appeared in print, please click here.