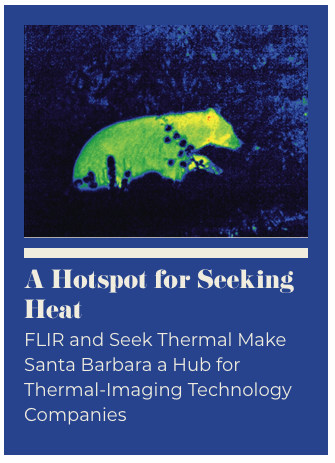 Santa Barbara is a world leader in infrared technology, with a long history that dates back to the scientists at the 1960s-era Hughes Aircraft Co., which later became the Santa Barbara Research Center.

With present-day industry bigwig FLIR located here, along with defense and aerospace industry heavyweights like Raytheon and Lockheed Martin and companies such as SE-IR Corporation, Electro Optical Industries, Seek Thermal, and Teledyne Scientific & Imaging developing technology for consumer and industrial applications—from smartphones and cars to night-vision cameras and sensors—this sector of tech is definitely a hot one.

“The Santa Barbara office is really the nerve center of a lot of our cores and components,” said Vatche Arabian, director of content marketing for FLIR, whose name is an acronym for “forward-looking infrared.”

With the Central Coast as the home to approximately 450 of its 3,000 employees worldwide, FLIR is considered the global leader in the design, manufacture, and marketing of thermal imaging infrared cameras.

Seek Thermal was founded in 2012 by industry pioneering scientists Bill Parrish and Tim Fitzgibbons, who spent 40 years advancing the state of military and professional-grade thermal-imaging technology. Seek is their third venture, following the successful acquisitions of their last two companies, Amber Engineering and Indigo Systems, which is now part of Raytheon and FLIR, respectively.

Their mission is to make thermal imaging a part of everyday life. “We make devices, for example, that turn your phone into a thermal imager,” explained Seek’s CEO and president Mike Muench. “We make handheld thermal imagers. We make products specifically for the fire and safety space, which are also stand-alone thermal scanning products.”

With manufacturing on-site in Goleta, the team of 100 employees at Seek Thermal was able to respond quickly to the COVID pandemic and the demand for screening measures. Said Muench, “We now make a scanning system for helping businesses to screen employees for elevated body temperature.” 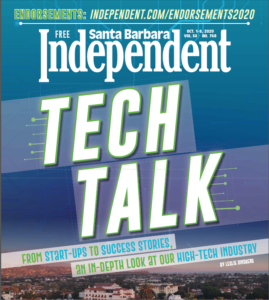