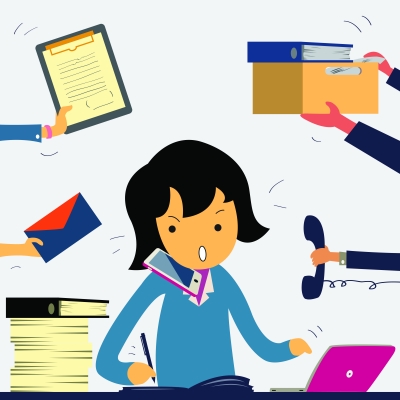 As I write this first sentence, I’m on hold with my insurance company-again. I’m also listening to phone messages, soaking my whites in bleach, taping an episode of “Next Food Network Star,” stretching my quads, doing a few Kegel exercises and sipping my coffee, which I know is bad for me again this month, because I read it in “Prevention” while I was standing in line at Vons this morning.

It’s taken years of practice, but I’ve finally ratcheted my level of multitasking to “Rock Star,” and now I find out that there’s some new research that says multitasking actually slows you down. I had to push my 1:15 ’til 2:30 and ignore my email, but I managed to get myself to the library to get a peek at psychiatrist Edward Hallowell’s book, “Crazy Busy: Overstretched, Overbooked, and About to Snap! Strategies for Coping in a World Gone ADD.”

You don’t think I have time to actually buy and read a book about busyness, do you? But I skimmed it, for free, and I really tried to focus on the book, and only the book, during the 13 minutes I calculated it would take the meter maid to get to my illegally parked car.

The good doctor, who specializes in Attention Deficit Disorder (ADD), says that it is literally impossible to pay conscious attention to doing more than one thing at once. Instead, you end up paying conscious attention to several tasks in succession, and not doing any of them very well. When you switch your brain between tasks you end up wasting, rather than saving, precious time because your brain continually has to restart and refocus.

Are you kidding me? And here I was thinking it might be time to have another baby now that there’s a breast pump with a car adaptor (the Pump in Style) on the market. Just don’t drive over any bumps while you pump.

My husband-who would never dare to sully the experience of watching ESPN by matching a pair of socks, even when they accidentally whack him on the side of the head-has sworn by the do-one-thing-at-a-time-theory for years. Has hell finally frozen over? If not, he can’t possibly be right.

And yet, other experts also support the movement towards uni- tasking. A study at the University of Michigan found that multitasking leads to expensive “time costs.” Team leader Dr. David Meyer says that the additional time required to switch between one task and another tends to increase with the complexity of the chores involved. And that over the long run, the time required to make these switches may lead to a 20 to 40 percent decrease in actual productivity.

A 40 percent decrease? I can’t afford that. As much yammering as I do about how busy I am-and I am actually pretty busy-the reason that I need to multitask is to make sure that I also have time to read novels, catch a movie once in a while and take a long lunch with a friend.

Sometimes I’m almost embarrassed to admit that it’s more important to me have a social life than it is to have a clean house or actually bake the cookies myself. Sometimes there’s this undertone of bragging or one-upmanship when people, especially moms, talk about how busy they are. And I’m always a little self-conscious that I, as the mother of one, will never be as busy as my nut job friends who have four or more children. But I work! C’mon, give a girl a few points.

Of course the trouble with writing about busyness is that it makes you even more hyper-aware of how you spend each moment. It’s exhausting. If I didn’t have to change the laundry loads, write a speech, pick up the trash, and take out the kid, I might take a nap.

Why not find out if you can walk, chew gum, and send an email to Leslie@LeslieDinaberg.com at the same time? For more of Leslie’s columns visit www.lesliedinaberg.com.  Originally published in the Santa Barbara Daily Sound on June 22, 2012. 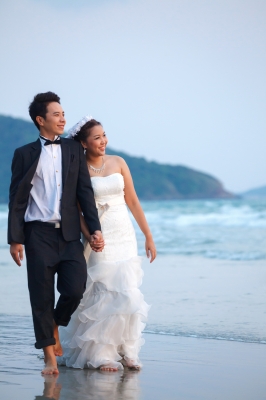 “What is it about wedding preparations that makes the ordinary tasks usually taking a woman from bed to bath, to bra, to base, to bagel, to bag, to butt-on-the-seat-of- the-car in 28 minutes flat, suddenly expand, exhale and evolve into hours upon hours of careful mirror observations and highly scrutinized tinkering?” writes Rebecca Bloom in her new novel, “Eat, Drink, and Be Married.”

I’m giggling as I read these words (So very true!) and laughing even more as I speak to their author, who is sneaking in our phone call during the precious naptime of her two-year-old son. Along with some of the laugh-out-loud-in-recognition scenes in her book, this is yet another thing about Rebecca Bloom that I can relate to.

Expecting her second child in the fall, Rebecca chats easily about writing, kids, tequila and the birth of “Eat, Drink, and Be Married,” her third novel. Here are some highlights:

Leslie Dinaberg: I really enjoyed the book. What was your inspiration?

Rebecca Bloom: I had been going to a lot of weddings and I was noticing that there is so much else that goes on around the wedding. There’s such a heightened sense of emotions for everybody. I wanted to write something that explored not just what the bride and groom were going through but what the guests themselves were going through. Weddings bring out a lot of different kinds of things for people and I wanted to explore those things.

LD: I was really struck by the coming together of the college friends who got back into their old dynamic so quickly and reverted to their old selves. Was that your experience?

RB: With my girlfriends from college, we have this shorthand that it doesn’t matter how long it has been since we’ve talked or how much has happened, the minute we’re together there’s not a lag, we don’t really have to catch up. There’s an instant repartee and there’s an instant sort of comfort and camaraderie. I wanted to put that in the book because I do think that in college you form such intense bonds because you’re with people 24/7 and you don’t really have time past college to ever really do that. … I wanted to capture that because I think it’s the case for a lot of people that the old friends sometimes are the ones that know you the best.

LD: A while back my husband and I were in that wedding a weekend phase and we sort of became the wedding critics. What do you think makes a really good wedding or a really not so good wedding?

RB: It is funny, when you write a wedding book everyone thinks you’re an expert on weddings but it’s sort of just your own opinion.

I think the best weddings are the weddings that really represent the bride and groom and you can tell that they really planned it for themselves and not for their moms and their friends. It’s really all about them. And those are often the most fun.

Our wedding had a lot of tequila and that really made it fun (Laughs). … I think the ones that are the best are the most relaxed and represent the couple-not just the bride.

LD: Were you married when you wrote this book?

RB: Actually I wrote this book, the first draft of it, when I was single. I wrote this wedding book and then I met my husband. So we’re sort of like that movie “Field of Dreams,” where the whole thing is like if you build it he will come. (Laughs)

LD: And now you have a husband, a young son and another on the way. How do you write and juggle all of that?

RB: Not as well as I would like. I am trying to start writing something new and it’s just hard. It’s hard to find the balance. … You just do the best you can. I can’t do everything all the time. And I can’t do it very well. My kids right now are the most important and that’s okay for me for right now.

LD: Not only are weddings fraught with drama, they’re also a huge business. Was that sort of marketing angle in your mind when you developed the story?

RB: I definitely knew … that there might be more avenues open maybe for publicity or marketing but I didn’t really think about that when I was writing it.

As I’ve gotten older though and as I end up starting my next book I’m thinking about that more because I want to make a living and I want it to sell and so I’m letting that come in a little bit. I have a bunch of ideas, so I am thinking which one is the most marketable and I’ll go with that.

But I’m not writing about zombies or anything (Laughs).

LD: I don’t know, a vampire, shades of grey, zombie wedding book with a historical twist could be huge.