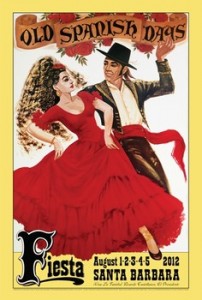 Love it or hate it, Leslie does both

Like many Santa Barbarians, I have a love/hate relationship with Fiesta. I’m not one of those people who flee from town every Fiesta, but you’ll also never catch me running for La Presidenta.

My ambivalence started when I was a kid, and like most things when you’re 7 years old, it was all my mom’s fault.

You see, other than the rare button repair or sock darning, my mom didn’t know how to sew. She didn’t garden either, so even though she let me be a flower girl in the Children’s Parade I never had the prettiest dresses or the prettiest flowers to toss.

It was still fun, but I’m sure it would have been much more fun if I’d had a better outfit, Mom!

The street dances at West Beach were awesome when I was a teenager. Part of the appeal was that parents weren’t allowed, but I guess the city canceled them when they got too rowdy. I’m sure this was my mom’s fault somehow.

Still, Old Spanish Days are always a lot of fun.

It’s too many Old Spanish Nights in a row that I pay the price for.

There’s something about those hot August evenings and Mariachi music that always lead to a little too much fun in the cactus-based beverage department, then one too many late night burritos at Casablanca (R.I.P.) “to absorb the alcohol.”

After almost four decades (yikes!) of Fiesta celebrations, I’ve finally learned to pick and choose my events. It’s hard, because they’re all fun in different ways and it’s always great to see friends. But it’s also a lot of people and a lot of festivities to deal with for five days straight, not counting the pre-events that start five months before.

Did I mention it’s a LOT of people?

But I really don’t love that Fiesta feverish feeling I get towards the end of the week when hearing one more chorus of “La Bamba” will put me over the edge. And as much as I love the colorful cascarones, I hate finding confetti in my laundry basket for the next six months.

But I’d like them even better if I had a prettier dress. 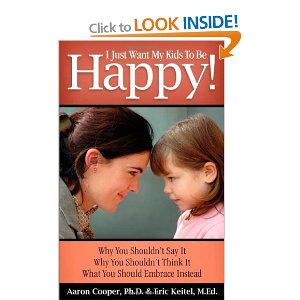 “America’s youth are drowning in happiness,” says Aaron Cooper, Ph.D., a psychologist concerned about the rising rates of youth depression and anxiety.

That’s a scary thought, but he might be right. “I Just Want My Kids To Be Happy!” has become the mantra of today’s parents. I hear people say that all of the time. I’m just as guilty as the next mom of sometimes valuing my son’s short-term happiness over the long-term lessons I could-and should-be teaching him.

I just read Cooper’s book called, I Just Want My Kids To Be Happy! Why you shouldn’t say it, why you shouldn’t think it, what you should embrace instead,” which he co-authored with Eric Keitel, M.Ed., and they explain why buying into the happiness mantra is a mistake.

“Without plenty of practice coping with ordinary sadness, upset, disappointment, and hurt, kids don’t develop resilience,” Cooper says. “And without resilience, they’re vulnerable to all kinds of problems.”

Of course everyone wants their kids to be happy, that’s human nature. But according to this book, “I just want them to be happy” is more than just a wish. It’s also expressing a belief that our kids’ happiness is the most important thing.

After reading it I began to think that happiness might actually be overrated.

Some of the negative consequences that result from just wanting children to be happy include:

Being captive to our children’s moods. I am so guilty of this one. From the time that Koss was a teeny tiny baby I have hated to see him be the least bit unhappy or god forbid, cry, and will do just about anything to make it stop.

Overprotecting our children from adversity. Guilty again. I can’t help it. It’s so hard not to want protect your child from life’s pain. Every time I hear about another kid being mean to Koss, or even inadvertently hurting his feelings, the mama bear in me wants to swoop in and make everything all right again-even if it means permanently banishing the mean kid from the forest. I’m still holding grudges from kindergarten while Koss has long since moved on.

Abdicating parental authority rather than cause our kids unhappiness. Again, guilty as charged. Really guilty. I can’t tell you how often I abandon my plans to run errands after school and agree to let him have a friend over, or agree to five more minutes of playtime (which turns into ten or 15 minutes) because he looked at me with sadness in those big brown eyes. This one’s a double whammy because after I give in, then I feel guilty for not being strict enough with him.

It might even be a triple whammy because, as Cooper explains: “Kids know how much their parents want them to be happy, and so when they’re sad or upset for whatever reason, they feel guilty thinking they’re letting their parents down. Many hide their distress at home, which compounds the problem and they end up feeling worse.”

One of the hardest lessons I’ve learned as a parent-okay I’m still working on this one-is to allow Koss to be unhappy. My impulse is to want to wipe away his sadness like it was spilt milk. At the same time I know that I’m doing him a disservice by trying to “make it all better.”

When it comes to our children’s happiness, less may actually be more. So instead of focusing on happiness, what should parents emphasize? Cooper and Keitel reviewed decades of research and found eight ingredients in people’s lives that reliably predict who is happy and who is not, including a sense of gratitude, closeness to others, and an optimistic outlook.

I think I get it now. The next time Koss is sad I won’t try to make it all better, I’ll just give him a hug, tell him how much I love him, and hope for the best.

Are we overemphasizing our children’s happiness? Tell Leslie what you think by emailing Leslie@LeslieDinaberg.com. For more columns visit www.LeslieDinaberg.com. Originally published in the Santa Barbara Daily Sound on July 15. 2011. 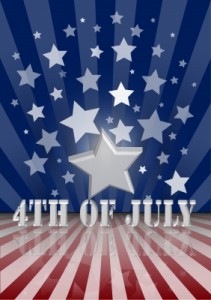 The Fourth of July is the one day of the year when laziness finally gets the respect it deserves, which is why the fourth is number one in my book.

Despite all of the organized activity options in town-which consists of multiple parades; a musical smorgasbord of American standards, symphonies, jazz, flamenco, show tunes, country, Klezmer and Zydeco; plus hayrides, horseshoes, and pancake breakfasts-no one thinks you’re nuts if you decline all that and elect instead to simply recline, relax, sip a beer and watch the sun go down till the fireworks go up.

Unless you sell beer for a living, you really can’t go to work that day, because it would be un-American.

There’s so much tradition associated with the fourth. I’m sure if they were still alive, the founding fathers-George Washington, Thomas Jefferson, Benjamin Franklin, John McCain, Jack Daniels and Orville Redenbacher-would celebrate just like we do, with beer and matches.

What other time of the year do we not only allow-but also encourage-children to play with fire? I’m sure the genius that invented sparklers did it so the kids would have something to do while the adults were getting drunk and overeating.

Plus, I get to play with matches too. What better time to get in touch with your inner pyromaniac than the Fourth of July. I’m always entranced by the fireworks: both the big booming ones shooting from the sky, and the cute, little, funny-named ones on the ground, like June Bugs, Whistling Petes, Glittering Crystal Fountains, and Flashing Peach Flowers in Spring (who my husband says he saw at the Spearmint Rhino).

Then there’s the exceedingly amusing, and mostly masculine mania to stare and poke at whatever’s cooking on the barbecue. I love to eavesdrop on the men folk as they ponder the eternal questions of life, such as, “How many minutes do tyrannosaurus rex steaks have to cook on each side? Hmm. What if I made the pterodactyl sausage instead? Let me look that up on my iPhone. Make sure you wear your headset. It’s okay, we’re outside, it’s still legal. That’s right. How do you turn this thing on? I’m not sure. Let me check my GPS.”

Plus, is there any other day of the year where overeating is considered an act of patriotism?

OK, maybe there is, but Thanksgiving is always so much work for my mom. And it’s not in the summer where you can eat outside and the cooking is relatively simple. Just throw a few dogs or burgers or dinosaurs on the grill and call it a holiday.

Another fun thing about the fourth is you get to dress up in ridiculous outfits and everyone’s too drunk to take pictures. I really wish I had asked Jimbo where he got that t-shirt that says, “Uncle Sam Wants You … To Have Another Beer.” That would have been perfect.

I guess I’ll have to wear the same old “Light my Firecracker” tee again this year. I’ll be the one exercising my independence by lounging on a beach chair if you want to come say hi. Happy Fourth of July!