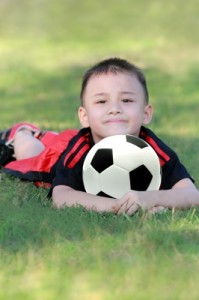 Okay, fine. We have a hard time getting enough parents to volunteer to referee and coach, but if they wanted form a committee to promote good hygiene I’m okay with that.

The first few paragraphs advocated what is basically common sense: stay home if you are sick; if you have a fever or other symptoms stay away from other kids until you’ve been well for 24 hours; don’t share water bottles, etc.

Even the suggestion to use “an alcohol-based hand sanitizer before handing out snacks and after a game” (as opposed to washing your hands) was probably a good one, though I wondered if perhaps we were going to be seeing “sponsored by Purell” embroidered on next year’s uniforms.

Our school district superintendent sent out a similar letter, cautioning parents to teach children not to share their personal items, wash their hands and, mostly importantly, keep their sick kids at home. Hallelujah, this is a huge pet peeve of mine.

But there was one key difference between the two letters. AYSO asked us to avoid “pre and post game handshakes and/or high fives.” Followed by the caveat, “we can still promote good sportsmanship with a post game cheer and by respecting our opponents, coaches and referees.”

Seriously, no high fives? No handshakes?

While I realize that cleanliness is next to flu-lessness and can appreciate the good intentions behind this, I wondered if the Infection Control Committee realizes there is a fine line between healthy hygiene and obsessive germophobia. I’m all for keeping our kids healthy, but seriously, no high fives? That last bit of physical contact is more than just tradition. It’s an important sign of good sportsmanship, a visible symbol that we all played our hardest and, win or lose, we can walk away from the field feeling good about the game.

Sure enough, the ban on hand-to-hand contact was enforced after our game on Saturday, when the kids had just spent the last hour rolling around the grass together, chest bumping, wrestling and helping each other up when they fall down.

The kids didn’t know what to do. Were fist bumps okay? One adult suggested shoulder taps, which I was sure, would result in a brawl.

My response was to giggle at the absurdity of it all. I wasn’t the only one. A referee commented on how odd it was that the kids were forbidden to shake each other’s hands, but that didn’t stop them from all coming to politely shake his hand and thank him for officiating their games. “Next time I’m going to hand out wipes,” he joked.

“I suppose latex gloves are always an option, and how about face masks,” said another soccer mom.

“Oh puleeeeeese,” said another friend. “Might as well have your kids just stay home FOREVER!!!”

Some saw the move as an indication of more than just a flu scare. “Ridiculous,” said a dad. “It seems part of the increasing attempt to teach every child to be afraid of everyone and everything… all for the sake of protecting other entities from liability. Invest in some hand sanitizer if the need arises but let the hugging and high fives commence/continue.”

Another said, “Must have been a big disappointment to have to cancel the planned mandatory AYSO feel good group hug. If I was still coaching I’d name the team the Snot Rockets and dominate.”

When asked about the handshake issue, assistant commissioner Eric Sanborn responded, “Please picture what the average six year old looks like after a soccer game. Sweaty and dirty, with a ring of Gatorade, snot and little bits of orange and watermelon all around his mouth. His shirt and hands were used all game to wipe his nose and they are now all covered with “snail trails” of snot. Would you want to slap ten hands like that and then eat a snack and lick your fingers? Especially during this cold season?”

“We discussed what other sports leagues, including some professional soccer leagues, have done to reduce the spread of germs in a sports setting and we determined that the after game handshake/high fives followed by postgame snacks, was the likely time for kids to share germs with their teammates and opponents,” Sanborn continued. “We decided to take the focus away from handshakes and high fives for this season only and try to promote good sportsmanship in other ways. It was amazing to see how well parents responded last weekend. … The feedback from our families has been overwhelmingly positive, with a ratio close to 20 positive emails for each complaint.”

Okay, I get it. I wouldn’t want to be the one who gives all the kids in Santa Barbara the swine flu either. No hard feelings. High five! 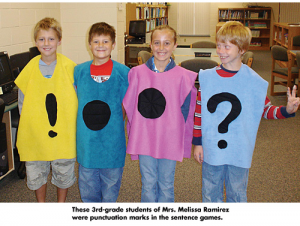 It’s not often I get to interview someone on the phone and have them burst into song, but that’s how excited Jeff Rubin gets about punctuation.

As the founder of National Punctuation Day (which is September 24), Rubin will go to great lengths – including singing a chorus of “Punctuation, punctuation. What is that? What is that?” to the tune of Frere Jacques – to get people to pay more attention to dashes, commas and semicolons.

He has also written a rap song (“An EXCLAMATION POINT is so like ‘wow,’ If you’re writin’ so excitin’ then put me in now!”) and performs “Punctuation Playtime” with his wife Norma in school assemblies all over California.

This is a guy who really likes his parenthesis and question marks. )And; Since this is the kind of Column that is fateD to have at least one punctuation’ error, no matter how hard I try, I figure that, I should; just own it?!(

A former journalist, Rubin says that “a proliferation of spelling, grammar and punctuation errors in newspapers that has since spread to magazines and books” motivated him to start the holiday in 2004. He wanted to bring attention to punctuation errors and the importance of punctuation in literacy.

“Lack of attention to punctuation really is a problem,” says a copyeditor I know, who has been in the business for more than 15 years.

“My students’ command of the English language is getting worse and worse,” says a Community College English teacher.

It is feedback like this that keeps Rubin motivated to spread the word about how critical proper punctuation is to communication. Every year he tries to do something to engage the public and get them to respond to National Punctuation Day. “Last year I endorsed the serial comma and that was quite a firestorm of emails and hate mail. But it got people engaged and it got people talking about punctuation. That’s what I want,” he says.

As a writer who works with several different editors in any given week, I’ve spent a fair amount of time wondering about whether I really care enough about the importance of serial commas, since every publication seems to have a different style.

Of course this is from another guy who makes his bread and butter on brackets and apostrophes. What about people who aren’t writers? Do they care about punctuation?

Not surprisingly, teachers have been among the first to embrace the holiday. Rubin told me about a law school teacher at Kent State University who has her class do a punctuation play in honor of the holiday and a teacher in Michigan who designed a punctuation football game.

For this year’s holiday Rubin is sponsoring a baking contest where entrants must send a recipe and a sample of their cookie, cake, pastry, doughnut, or bread baked in the shape of a punctuation mark to win prizes.

If you don’t feel up to baking – or can’t stomach giving away your cookies – Rubin offers another game plan to celebrate National Punctuation Day.

* Take a long shower or bath.

* Read a newspaper and circle all of the punctuation errors you find (or think you find, but aren’t sure) with a red pen.

* Stop in those stores to correct the owners.

* If the owners are not there, leave notes.

* Visit a bookstore and purchase a copy of Strunk & White’s The Elements of Style.

* Look up all the words you circled.

* Congratulate yourself on becoming a better written communicator.

* Write an error-free letter to a friend.

I think I’ll do the list backwards and start with a nap.

For more information about National Punctuation Day visit www. nationalpunctuationday.com. When Leslie’s not playing grammar police she can be reached at Leslie@LeslieDinaberg.com. For more columns visit www.LeslieDinaberg.com. Originally published in the Santa Barbara Daily Sound on September 18, 2009. 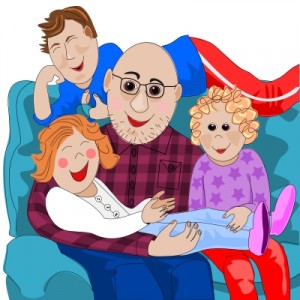 Sometimes I can’t wait to be a Grandma.

Not that I don’t love this stage of my life-chaotic carpools, homework hassles and morning mayhem aside-because at ten our son is old enough to take almost anywhere and still young enough to want to be with his parents. But I know those days are dwindling fast. The specter of his teenage years casts a long shadow every time he gels his hair or rolls his eyes, which is happening more often every day.

Being a Grandma seems so marvelously simple. As Robert Brault said, “To become a grandparent is to enjoy one of the few pleasures in life for which the consequences have already been paid.” What could be better? You spend time with the kids and you love them. There’s no way to do that wrong. There are no obligations to feel guilty about. No stretch marks, no late night phone calls to “pick me up” from sleepovers, no allowances, no dioramas, no lunches to pack and no laundry to do.

There are a lot fewer vegetables and a lot more dessert if you’re a grandparent.

A grandparent’s sole duty in life is to spoil their grandchildren-to hang on their every word, to bring them a new game or toy every time they see them, to tell them stories of all the rotten things mommy and daddy did when they were kids, to go on adventures, or take them swimming, to ball games or the movies.

Grandparents also make incredible audiences. When grandchildren learn to kick a ball, bust out some fancy dance moves, or jam on their first guitar piece, they can count on their grandparents to watch, listen and applaud-loudly and obnoxiously-every single time.

In turn, their grandchildren adore them. I still marvel at the way Koss’s eyes light up, he grins, mugs, chats up a storm and utterly turns on the charm whenever any of his grandparents are around.

Well, at least most of the time.

Lucky for all of us, his grandparents are around a lot. We’re lucky to all live in the same town. Really, really lucky. They’re great babysitters-which I probably, ahem, okay, absolutely definitely appreciate more than the kids-but they also make meals with him, which can get rather messy; come to watch him kick, run, jump and shoot, depending on which sports are in season; play video games with him; read books together, and take him to the library and the bookstore; and play lots and lots of card and board games. Heck, my dad even volunteered in his classroom and coached his flag football team.

I can relate to what Grandma (and great writer) Judith Viorst wrote in her contribution to the book “Eye of My Heart: 27 Writers Reveal the Hidden Pleasures and Perils of Being a Grandmother.” “Even if we are known to be basically modest, even if, as mothers, we refrained from shamelessly bragging about our kids, we grandmothers feel entitled to inform the world that our grandchildren are not merely extraordinary but…the most extraordinary. And if another grandmother is one-upping us in the extraordinary contest, we one-up right back.”